Currently I am listening to a series of Environmental Health master classes with the first one on Electromagnetic radiation. I have always had an interest in this topic as many years ago I remember being told that engineers on the Centrepoint tower near the transmitters would be infertile within fifteen minutes if they weren’t wearing shielding. That highlighted to me how dangerous even invisible sources of radiation can be to the human body.

Now for most people this isn’t a risk as they would rarely be in this situation. However over the last twenty years with the increasing use of a wide range of devices and Wi-Fi our exposures have increased dramatically and some people are really starting to be affected badly often with one of the first signs being insomnia, difficulty getting to sleep or staying asleep. Another major symptom is usually headaches particularly at the front of the head.

Generally I would be concerned about the insomnia and headaches being associated with EMF if it started after you moved house or if you sleep well when travelling but not at home. Australian levels of acceptable radiation are much higher than Europe (often as much as ten times higher) as they have largely been set by industry, rather than being based on research.

The first thing I would recommend is to remove devices from the bedroom, even a digital clock radio which emits low levels of radiation should be at least two metres from your head. Secondly do a quick audit of where you are sleeping relative to strong energy currents from your meter box, fridge or microwave oven. Ideally the further away the better but at least a metre away even through the wall where the device is located. Turning off Wi-Fi in the home at night can be beneficial. There have been reports where severe insomnia sufferers started sleeping when towns lost power for a few days at a time. 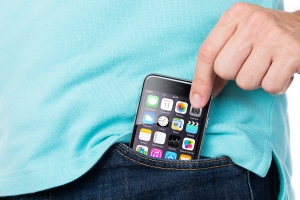 The other area to look at is your phone. Have you noticed how much it heats up when you hold it close to your head for a ten or fifteen minute conversation. Do you really want to have that heating other parts of your body on a regular basis?? And you know where most men put their phones, at least women largely stick it in a handbag! Reduce your exposure by using your phone like a teenager and mainly texting or get a pair of headphones for calls if you need to talk to people. At home think about switching to a corded phone as even the cordless phones put out a reasonable amount of radiation.

If you are interested in more information on this topic I can recommend Nicole Bijlisma’s book Healthy Home, Healthy Living as its well researched and is focussed on solutions. Nicole is a naturopath and building biologist. She also has quite a lot of information on her blog.

Have you made changes to reduce your exposures to EMF? Let me know how it affected you.

Christine Pope is a practicing Homeopath and Nutritionist based at Elemental Health, St Ives (8084 0081). She is also Head of Nutrition at Nature Care College at St Leonards.